Röda Sten Konsthall (Art centre) is a non-profit international exhibition arena for contemporary art and culture. The building serves as furnace station which provides heat for the local industry. Beside its exhibitions, it is also used as a cafe, bistro and a club.Event in Röda Sten was held by We Are All Bastards who organize dubstep events in the beginning of every month. This time was their 4th year anniversary. And for this special occasion they invited two Finnish dubstep artists: LAS and Mikael. The other two aces in their sleeve were Content and Amazing A. Event also included local musicians. You can find Bastards on Facebook (https://www.facebook.com/WeAreAllBastards) and website (http://www.weareallbastards.com/).

The rainy day on the 1st of February couldn`t be more appropriate for the dark sounds waiting for us. Our shoes were all wet when we were walking under the huge Älvsborg bridge to the lonely brick and graffiti of Röda Sten. A step in was a warm relief, so we could finally put down our jackets and enter the dark zone. Comparing to the event in January, the stage was on the right side this time. The lights were dimmed, uknown mist was coming out of the speakers. And on the wall above the artist you could see a really nice fractal triangle where the projections were uphelded. Like in a tomb, where the eye of horus is following your every step. We didn`t come precisely on time, but the first musician we listened had a lot breaks in his mixing. That irritated a part of the crowd but the other part of the crowd was just dying for more. Comparing with the event in January, there was not so many people. But that did not spoil the atmosphere. The hunt for more undead wandering souls continued. The next author was more consistent and gloomy, slow and deep, but you could see some light tunes overcoming the foggy atmosphere. Like Seth and Horus battling in the midst of speakers. The crowd did a lot of wild dancing through the whole party. The end was really magnificent and it consisted of a little bit faster tunes which pumped up the crowd to shake the deadly tomb of Röda Sten. 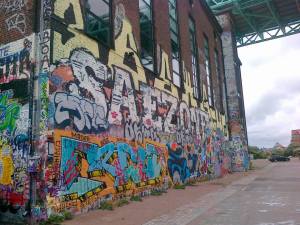